Some context before you read

This document contains my unedited application for an Emergent Ventures grant.

This is a screenshot of the prompt in the online application. There is also a request for the summary of the proposal. 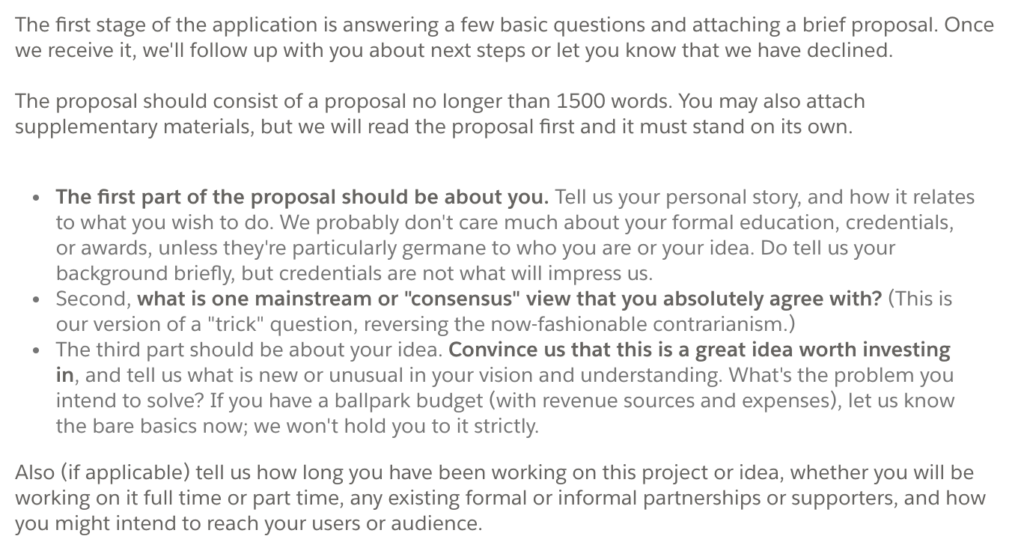 I submitted my application on October 20, 2020. Some of what you’ll read is underway(!), some hasn’t (yet) come to life, and some has come to life turned out a little different than predicted. Along those lines, if you read something that gets you excited or seems lame, I hope you’ll tell me! I’m still learning what would be useful and what wouldn’t be and your input would be a great help.

It is worth noting that before applying for this grant, I applied for a Liberalism 2.0 Fellowship (also run by Emergent Ventures). You can find my unedited application for that here. I was not selected. However, the program lead, Tyler Cowen, reached out and suggested I consider turning this into a business and re-apply for an Emergent Ventures grant.

I joined Stripe in early 2015 when the company was only ~200 people. Prior to Stripe, I had worked at tech companies of various shapes and sizes- from a 6-person YC-funded startup to Google- and I could tell immediately that Stripe was different.

The office was pretty quiet (people were cranking). We were encouraged to write everything down and then share it with the entire company (whether it was a meaningful strategy document or a mundane user email). The mission, they told us, is to “increase the GDP of the internet” (but what did that even mean?!). There weren’t any company happy hours or sales gongs. People talked about whitepapers over dinner. When writing emails to customers, we were told not to use phrases like “thank you for your patience” (too presumptuous) or “as mentioned earlier” (passive aggressive).

Over my ~five years working at Stripe, the company hired over 2,000 more people and we had to build new things in new ways for our users. The work evolved but the way we did it never wavered.

Company culture can be a tricky thing to put your finger on, but I felt a pull towards understanding exactly what was so special about Stripe’s. I wondered if culture was something that could be prescribed a priori, not just described post-hoc. My gut said yes and that I was on the receiving end of a leadership team who had cracked something about culture-building.

That hypothesis set into motion some very diligent note-taking on Stripe’s organization and the questions our users were facing (many of whom are scaling startups themselves). I studied how other ambitious organizations known for having a strong culture built theirs (think: Apple, Amazon, Manhattan Project, San Francisco 49’ers, DARPA). My research was further bolstered through my work standing up Stripe Press. I slurped up >1,000 books, podcasts, and essays on the topic and have talked with friends/colleagues about their company cultures. I also played a role in some of Stripe’s culture-shaping initiatives like standing up our company-wide planning process, helping integrate newly-acquired teams into the company, drafting our first inclusion principles, and creating a forum for Stripes to share their personal history with each other.

This all led me to believe that a tactical, prescriptive, playbook for building company culture could exist… but didn’t. So, I feverishly started thinking and writing about how to fill that gap and haven’t stopped since.

A consensus view I agree with: even a simple message won’t survive a game of telephone.

You remember how to play telephone, right? Gather in a circle. Tell the person next to you a secret. Tell her to pass it along. Repeat until the secret makes its way all the way back to you. Spoiler alert: by the time it does, the secret will almost certainly be unrecognizable.

I can recall teaching my sister how to play while chaperoning her kindergarten class on a field trip. Kate started with a secret based on her favorite fruit: “I like pineapple.” By the time it got around the circle, the phrase had morphed into “Kate watches Sponge Bob” (who happens to live in a pineapple). Kate was upset; she doesn’t care for Sponge Bob at all.

This concept we all learn in childhood has only come into sharper relief in my professional life.

When I talk about what it was like to work at Stripe, I’m surprised by what surprises people. It’s always things like not being able to get through the day without multiple references to the company operating principles. Or that instead of procrastinating by putzing around the internet, we poked around other team’s docs and emails. Or that Stripes can recite content from “iconic” company documents verbatim (sometimes years after they were originally published). Or that meeting notes were a privilege to send, not a chore.

These examples have one thing in common. As patio11 (Stripe employee and startup whisperer) says, “Stripe is a celebration of the written word which happens to be incorporated in the state of Delaware.”

Want someone to know something? Write it down. Even a simple message won’t survive a game of telephone.

Paul Graham recently called Stripe the next Google. There would be a non-trivial market of companies that would pay top dollar to help them bottle up some of that “Stripe magic.” When I left Stripe, I tweeted ~100 words on what I thought made the company so special; 1.5M people have seen it and countless people replied or messaged wanting more. I can offer that and then some. The Stripe Way can act as a trojan horse into a conversation about examples from the many, many other companies I’ve researched.

More broadly, the tech “culture wars” are heating up (Coinbase’s CEO’s blog post about separating work and politics is the latest). Many tech employees consider their companies their primary community and source of identity. VC’s are investing more in content programs and operating partners that provide tactical guidance for their portfolio companies. I have a hunch that other industries are eager to borrow from (the good parts) of tech culture but don’t know where to start.

So, I’m starting The Kool-Aid Company. The mission is to help organizations come together to do their best work.

I’ll offer free public-good resources (mostly writing on the internet) and hands-on consulting (for a fee).

There is no good or bad culture, only strong and weak culture. The more culture-driving tactics a company implements, the stronger their culture will be.

Note: When working with startups, I will always take equity instead of cash, *means equity component is required

Where will my clients come from?

How an Emergent Ventures grant would help?